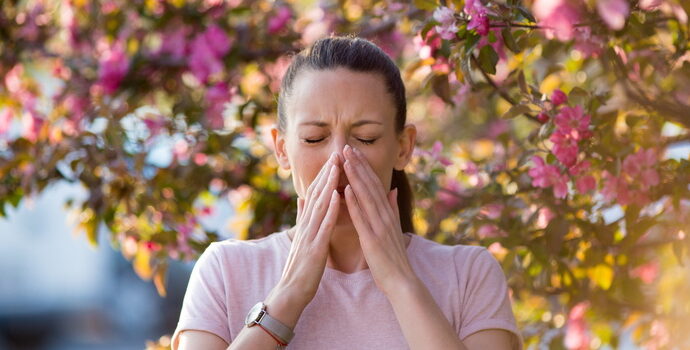 Allergies occur when the immune system reacts abnormally to a trigger that is normally harmless to others, resulting in a variety of reactions. Histamines, which cause inflammation and other symptoms, are released during allergic reactions. Antihistamines are frequently prescribed to relieve allergy symptoms, but they can have unfavorable side effects, such as drowsiness. Common Allergies

Allergies occur when the immune system reacts abnormally to a trigger that is normally harmless to others, resulting in a variety of reactions. Histamines, which cause inflammation and other symptoms, are released during allergic reactions. Antihistamines are frequently prescribed to relieve allergy symptoms, but they can have unfavorable side effects, such as drowsiness.

Airborne mold and pollen are the most common causes of allergic rhinitis, also known as hay fever. It is commonly thought to be a seasonal allergy, but it can become perennial due to daily contact with dust, pet hair, dander, and other allergens. Constant inflammation of the sinus cavities can result in a sinus infection, also known as sinusitis, which can progress to become a chronic condition. Headache or facial pain, stuffy or runny nose, itchy eyes, sneezing, and general fatigue are all symptoms of both.

Aside from allergic rhinitis and sinusitis, other allergies such as rashes, hives, or eczema can cause bumps, itching, and redness of the skin. The causes of these symptoms are frequently difficult to pinpoint, as they can result from contact with plants, certain compounds in food and medication, and a variety of other less obvious triggers.

Some herbs work naturally by protecting cells from histamines rather than blocking the body’s ability to produce them. Take a look at these five herbs that have been shown to be effective as alternative treatments for common allergies.

Because of its dozen different anti-inflammatory compounds and seven natural antihistamines, ginkgo has a significant effect on controlling allergies and improving respiratory function. Ginkgolides are compounds found in the herb that help reduce allergies, asthma, and inflammation by blocking a protein that causes asthmatic bronchial spasms.

Almost everyone has been moved to tears by chopped onion. This reaction can also aid in the clearing of sinuses that have been irritated by allergies. Furthermore, quercetin, an antioxidant compound found in onions and other foods, has antihistamine properties that aid in the decongestion of the airways.

Eucalyptus is a decongestant that can help with everything from hay fever to sinusitis to other obstructive respiratory conditions. Its active ingredient, the antibacterial cineole, is responsible for its anti-inflammatory, mucolytic, and bronchodilating properties. Eucalyptus essential oil (alone or in combination with other essential oils) is frequently used to relieve congestion, and eucalyptus aromatherapy aids in coughing reduction. For respiratory relief, make hot jasmine and eucalyptus tea, and for bronchitis relief, make a eucalyptus and linden infusion.

Feverfew has long been known for its anti-inflammatory and anti-allergic properties. The herb contains vitamin B3 (niacin), iron, vitamins A and C (ascorbic acid), and it inhibits the formation of prostaglandins, which are natural chemicals that play a role in inflammation. It has also been shown to prevent migraines by preventing the release of serotonin from forming platelets.

Because of the fine hairs on the leaves and stems that contain irritating chemicals, stinging nettle has been associated with irritation when touched. In human studies, however, freeze-dried nettle was found to reduce sneezing and itching in those with allergic rhinitis, with nearly half of participants claiming the herb was more effective than previously used allergy medications.

Since allergies have become such a common problem, there are many more herbs and herbal remedies that, when used properly, can help relieve symptoms without the use of pharmaceuticals.