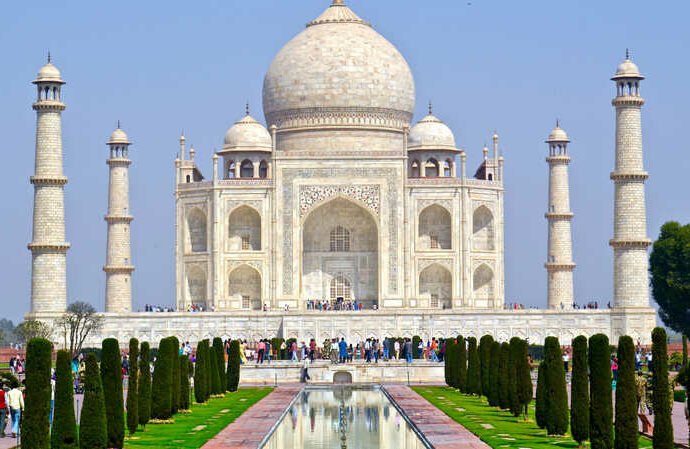 This content has been curated at the author’s discretion and does not necessarily reflect the views of Encyclopedia Britannica or its editorial staff. Consult individual encyclopedia entries about the topics for the most accurate and up-to-date information. The Islamic world’s architectural heritage is astoundingly rich. Here is a list of some of the most famous

This content has been curated at the author’s discretion and does not necessarily reflect the views of Encyclopedia Britannica or its editorial staff. Consult individual encyclopedia entries about the topics for the most accurate and up-to-date information.

The Islamic world’s architectural heritage is astoundingly rich. Here is a list of some of the most famous mosques, palaces, tombs, and fortresses in the world.

Mumtaz Mahal, the third and favorite wife of Mughal emperor Shah Jahan (reigned 1628–58), died in childbirth while giving birth to the couple’s fourteenth child in 1631. Devastated, the emperor commissioned the Taj Mahal, a massive mausoleum complex on the Yamuna (Jumna) River’s southern bank that took more than 20 years to complete. With the possible exception of the Dome of the Rock in Jerusalem, the Taj Mahal is now the most famous piece of Islamic architecture in the world. The monument is notable for its size (the finial of the central mausoleum’s dome stands 240 feet [73 meters] above ground level) as well as its graceful form, which combines elements of Indian, Islamic, and Persian design. Viewers are dazzled by the central tomb’s white marble, which appears to change color with the light. Close inspection reveals that the structure is richly decorated with Arabic calligraphy and semiprecious stone inlays. Mumtaz Mahal and Shah Jahan have cenotaphs (false tombs) inside; the actual tombs are in a chamber beneath the ground floor. Travelers reported in the 1660s that Shah Jahan intended to build a matching mausoleum for himself out of black granite on the opposite bank of the Yamuna; however, modern scholars regard this as a legend with no basis in fact.

The Alhambra is a palace built in the 14th century by princes of the Muslim Nasrid dynasty (1238–1492) on a hill overlooking the Spanish city of Granada. Although some parts of the palace have been demolished, three parts remain: a fortress (Alcazaba, or al-Qasbah) on the west end of the hill, a princely residence to the east, and the Generalife, a collection of pavilions and gardens. The Alhambra’s courtyards and rooms are lavishly decorated with colored tiles, carved stucco, carved wood, and calligraphy. The intricately carved geometric stalactite designs (a recurring pattern in Islamic architecture called muqarnas in Arabic) that adorn the halls surrounding the Court of the Lions are among the most remarkable ornamental features.

The sprawling Friday Mosque is located in the heart of Esfahan, a city rich in architectural treasures. A mosque has stood on the site since the 8th century, but the two domes built during the Seljuk dynasty, which ruled parts of Iran in the 11th century, are the oldest elements of the current structure. The mosque was rebuilt in the early 12th century around a rectangular courtyard flanked on each side by an iwan—a type of hall that opens into a tall arch on one side. The four-iwan design, which was first seen in Esfahan, later became the standard for Iranian mosques.

The Dome of the Rock

The Dome of the Rock in Jerusalem is the oldest and most well-known Islamic monument. The design and ornamentation are rooted in the Byzantine architectural tradition but also display traits that would later come to be associated with a distinctly Islamic architectural style. It was built in 691–692, about 55 years after the Arab conquest of Jerusalem. The structure is made up of a gilded wooden dome atop an octagonal base. Two ambulatories circle around a patch of exposed rock on the inside. The location is sacred to both Judaism and Islam; in Jewish tradition, it is said to be the location where Abraham prepared to sacrifice his son Isaac, while in Islamic tradition, it is said to be the location of Muhammad’s ascension to heaven. The interior is richly decorated with marble, mosaics, and metal plaques.

When the Abbasid caliph Al-Mutawakkil (reigned 847–861) built the Great Mosque of Samarra (in Iraq) around 850, it was probably the largest mosque in the world, with a total area of nearly 42 acres. The mosque was constructed of baked brick and its interior was decorated with blue glass. The majority of the structure was destroyed during Hulagu’s Mongol invasion in 1258, but one of the most intriguing features, the 170-foot (52-meter) minaret, was preserved. The minaret is designed in the shape of a cone, with a spiraling ramp leading to the top. It’s unclear why the builders chose the conical shape; some say it’s reminiscent of an ancient ziggurat.

The Citadel of Aleppo

The medieval fortresses in cities like Cairo, Damascus, and Irbil are among the most impressive works of architecture in the Middle East. The citadel on top of a hill in the middle of Aleppo, Syria, is one of the best remaining examples of Islamic military architecture. Archaeologists have discovered fortifications on the site dating back to Roman times and earlier, but the citadel was built in the 10th century and acquired its current form during the Ayyubid era (around 1171–1260). Inside the citadel’s walls are residences, supply chambers, wells, mosques, and defensive installations—everything needed to withstand a long siege. The massive entrance block, built around 1213, is the most imposing part of the complex. A steep stone bridge supported by seven arches leads across the now-dry moat to two towering gates, the Gate of the Serpents and the Gate of the Lions. In order to gain access to the citadel, invaders would have had to breach both gates and navigate a winding passageway while defenders poured boiling liquids on them and arrows shot from numerous arrow slits rained down from above.

The first sections of the Great Mosque of Córdoba, Spain, were built on the site of a Christian church in 784–786 by the Umayyad ruler Abd al-Rahman I. Several enlargements were made to the structure in the ninth and tenth centuries. A richly decorated mihrab (a niche in a mosque pointing in the direction of Mecca) set behind an intricate arch was added during one of these enlargements. The hypostyle hall, which contains approximately 850 columns made of porphyry, jasper, and marble and supports two-tier horseshoe arches, is another notable feature of the mosque. The majority of the columns and capitals were reused from previous structures.

The towering dome and minarets of the Suleymaniye Mosque complex, which stands on an artificial platform overlooking the Bosporus, are among the most prominent features of Istanbul’s skyline. It is the largest and arguably the most beautiful of Istanbul’s imperial mosque complexes, built between 1550 and 1557 by Ottoman emperor Suleyman the Magnificent at the height of the Ottoman Empire’s power. The mosque’s interior is a single square-shaped room lit by over 100 large windows, many of which are stained glass. The ornamentation is simple and does not detract from the central dome’s imposing size, which measures 90 feet (27.5 meters) in diameter. A hospital, several religious schools, a row of shops, a mausoleum, and a bath are located around the mosque. The complex was designed by the Ottoman master architect Sinan, whose buildings were critical to the establishment of a distinctly Ottoman style of architecture, and is regarded as one of his masterpieces. Sinan and Suleyman are both interred in the complex.